How to make distractions work for you

Today’s post starts with a little story about my oldie spaniel Breckin. We aren’t entirely sure exactly how old he is but he’s been with us for nearly 11 years and was a horrible teenager when he landed so our best guess is that he is 12+ probably. He has spondylosis that causes particular problems around his lumbosacral region and is in kidney failure. He fair rattles with the medications and supplements he is on. But….. he still loons around and makes me cringe with the leaping and and charging about. He takes corners like a dirt bike these days with his back end swinging out – if canine drifting was a sport he’d be a gold medalist for sure.

He’s also become more clingy and worries about loud noises more than he did – whether that’s due to pain or the fact that his hearing seems to be worsening I don’t know. Well I say his hearing is worsening, I’m not sure. You see he seems to have forgotten a lot of the training he once had.

He is much more impulsive than he ever was, even as a horrible teenager. He thinks nothing of swiping food off my plate or out of my hand and he is surprising athletic and fast for a wonky dog, that it always seems to take me by surprise. He charges at doorways, waiting and giving eye contact – something all my dogs are taught to do from day one with us and is reinforced every single time – well that seems to have disappeared completely from his repertoire. Even if I wait him out and get it eventually and pay up with extra goodies as well as the open door I know the next time it’ll be like we’ve never done it before.

His recall from the front garden has been the most irritating thing to have broken though. He goes out into the front garden for toilet trips – there are no steps to negotiate and he also doesn’t then have to run the gauntlet of the younger dogs either. Thanks to his knackered kidneys he needs to go out to toilet several times a day, sometimes within 30mins of his last trip depending on how much water he has consumed. This means I’m up and down letting him out quite a lot during the day. My working day. I can guarantee he’ll need letting out just when I’m in the middle of a meeting or a big piece of work or something equally annoying. And it seems the more urgent my work is, the more urgent it is for him to stay out in the garden. Eating the dandelion plants. 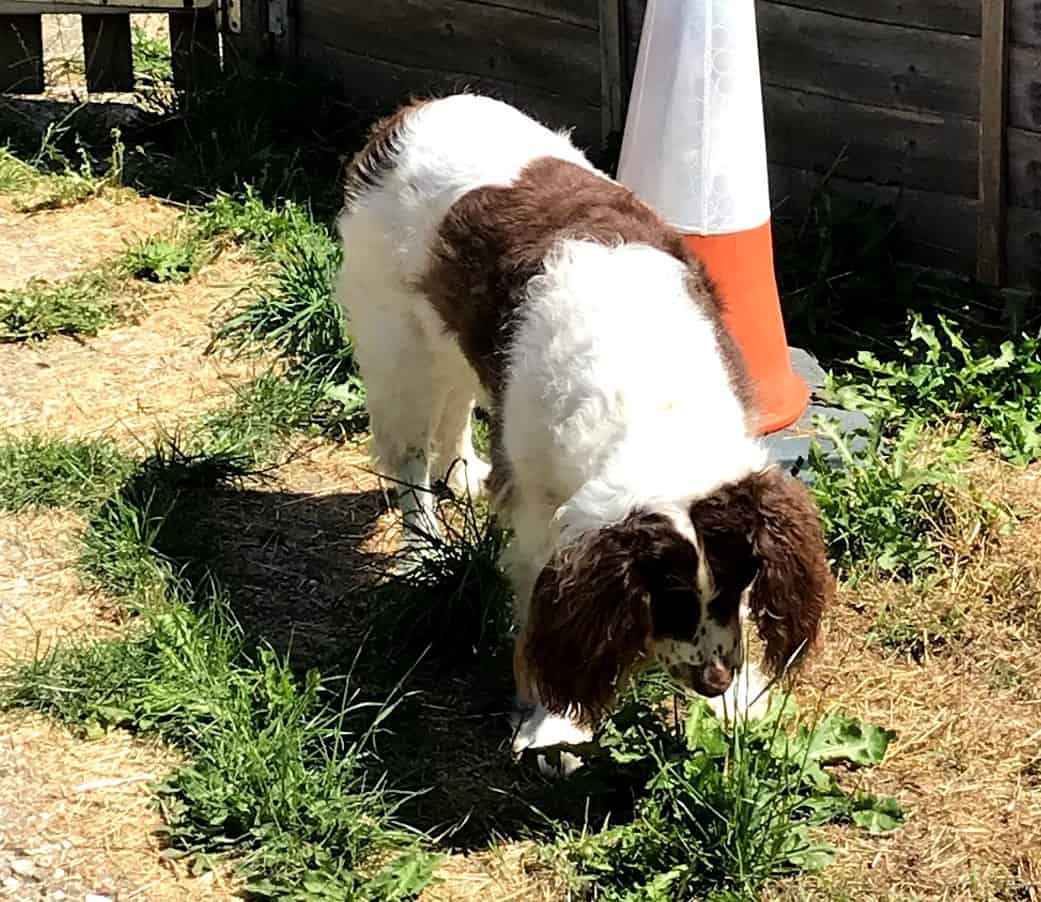 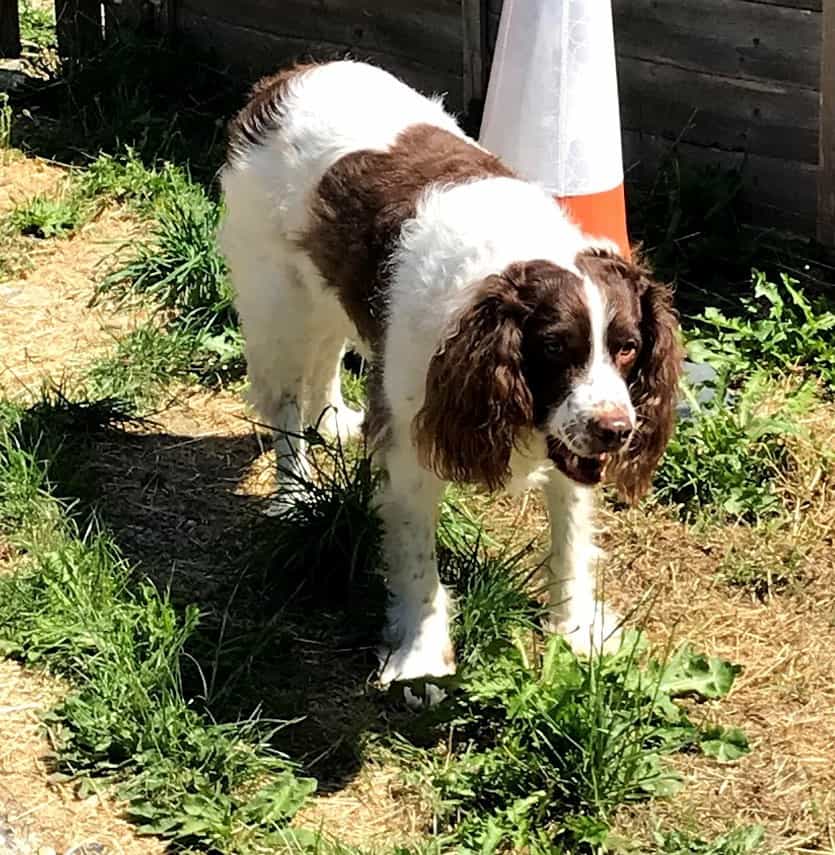 Our front garden isn’t completely secure, in that people could easily come in, or open the gate, or if they were particularly stupid steal an old doddery annoying spaniel. So that means he is always supervised outside. I’ve spent a lot of time at the front door, watching him hoover up the dandelions, calling him repeatedly, and him taking absolutely no notice of me whatsoever. I’ve been getting more frustrated, and the more frustrated I get the more likely he has wanted to stay munching on the greenery. Something had to change.

I have no idea why he is obsessed with the dandelions, but they aren’t dangerous for him so I wasn’t worried about stopping him, I just wanted him to come inside more quickly. Then I had my brilliant idea. I needed to make the dandelions work for me. Clearly they are what he wanted at that moment, the usual food reinforcers weren’t enough. So I’ve been picking handfuls of the leaves when I let him out – fortunately our gardening skills are such that the garden is full of them and no matter how many get picked or eaten we haven’t run out. And I’ve been using the picked leaves as reinforcement for coming back in.

The dandelion eating, while it hasn’t disappeared, has decreased a lot, and the coming back inside in a timely manner has increased beautifully. I’ve made the dandelion distractions work for me rather than against me.

This is actually something that I have utilised a lot in my training, and talk about extensively in my recaller class. Once you start thinking of distractions as potential reinforcers it opens up a whole world of possibilities for your training.

Of course some distractions are never really going to be appropriate to allow your dog to do whatever it is they want to do – chasing children in the park, chasing sheep are definitely not appropriate. But…..chasing the flock of seagulls in the park, running flat out into the pond, chasing the squirrel up the tree, getting to go say hi to other dogs or people, all of these can be leveraged if you want to (with the usual caveats of if it’s safe and appropriate yada yada).

These kinds of reinforcers and their use in training often gets referred to as the Premack Principle. Which is correct, well depending on how you do it, but that implies that the Premack principle is only occurring in certain circumstances – and that’s not true at all. Like gravity it’s always there and you can either decide to work with it and use it to your advantage or work against it – which generally means you have to add in some work or energy yourself to get what you want. Both approaches can and do work and depending on the situation you may choose one over the other. Like everything in training, there’s no one right way to do anything.

What the Premack principle says is that a more probable behaviour can reinforce a less probable behaviour. That is a behaviour that your dog is highly likely to do will reinforce a less likely behaviour. We use this a lot when we train using food, just because eating food is for many dogs a highly likely behaviour. Once we get away from the treat being the reinforcement and start thinking of it as eating the treat as the reinforcer we can then start to see how many other behaviours we could potentially use as reinforcers.

For my dogs, sniffing is a high probability behaviour when out on a walk, chasing birds also pretty likely along with running into water. For Fraggle chasing a tennis ball is about as high probability as it gets, I’m yet to come across a situation where it doesn’t trump anything else. The boys don’t have that kind of ‘beats everything else all the time’ reinforcer although for Breckin food does come close. For Flint, running around sniffing and peeing on things is pretty high though.

So how do I use these distractions as reinforcers in real life then?

Well for Breckin it was a matter of grabbing some dandelions, then when he looked at me when out in the front garden – marking him and dropping the handful of leaves in the hallway for him to eat. Then I just shaped it so that looking at me gradually became coming into the hall – and the leaves got thrown into the living room for him to graze on.

I use the idea on walks all the time – checking in with me will get reinforced with food by me but then they will be released to go sniff, or run into the pond, or go greet the other dog. As I’ve done this consistently what tends to happen now is that they will spy something they’d quite like to do and check in with me automatically. I can then decide whether they can do ‘the thing’ or not. As they often get to do the thing, it’s not that big a deal when I ask them to stay with me instead.

Of course this doesn’t happen easily at first, it’s not like I just went out with them day one and walked them by the edge of the pond and got eye contact so I could send them in the pond. If I’d done that I would have had 3 spaniels splashing about madly within seconds with no hope of getting any kind of focus or check in with me! No, it has to be done systematically, gradually increasing the difficulty so that your dog can be successful at each stage. The first stage is to work out what you could use as part of your training plan.

One caveat here is that if the highly likely behaviour is going to produce other unwanted behaviours or an undesirable emotional state in your dog then it’s going to be best to not use it – or be careful about how you do. For instance, many people recommend using chasing the squirrel to reinforce loose lead walking in the park, and you can totally do it. However……if your dog is going to be a complete mess once you’ve run that squirrel up the tree together and is going to be so over aroused that you would have to forcibly drag him away and any hope of getting another step of loose lead walking will have whooshed up the tree with the squirrel. Well I’m going to suggest that you aren’t going to get much out of that particular reinforcement strategy and you’d be better choosing another way. For now at least, until you’re more likely to have a dog that is still on earth after the chase and not orbiting Pluto somewhere. The same goes if your dog is likely to wind up worried or fearful, we want happy emotions where your dog is excited and joyful but totally able to still think and respond.

That’s why I don’t allow Breckin to chase pheasant (well not on purpose anyway, it’s not like I can control the suicidal ones that drop down in front of him). He completely loses his shit around pheasant and has to be put back on lead for a while if he does manage to put one up on a walk until he manages to engage his brain again. Other birds are fine. And the 2Fs deal with pheasant ok too. It’s always going to be individual.

So my challenge to you is to list out everything your dog likes doing – the good the bad and the ugly and rank them in order from most likely to least (you may find some are context specific and that’s fine). Then highlight the ones that you think you will be able to

Remember to think about them in terms of behaviour and not as things – it’s chasing the birds not the birds themselves.

Then go out there and start using them and increase the potential reinforcers you have available to make your dog’s life more interesting and unpredictable.

Let me know how you get on, I always enjoy hearing about the more unusual things that dogs like doing!