How to achieve easy living with your dog 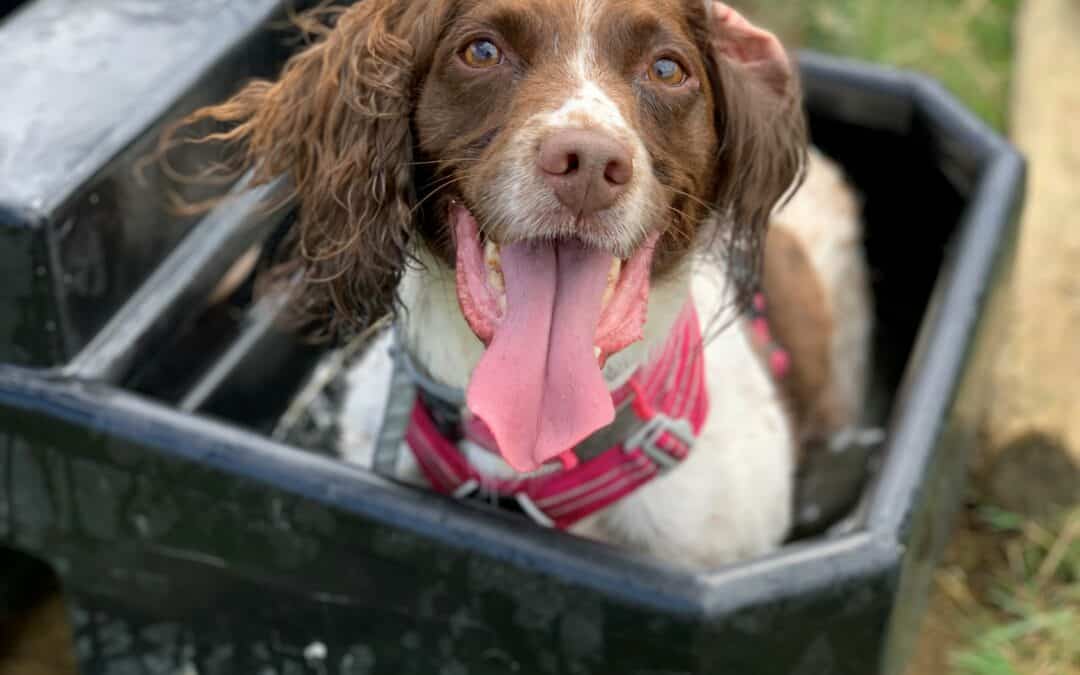 I live with three spaniels currently. At one point I lived with two German Shepherds, a saluki and two spaniels. I always felt I should even things up with another sighthound. But didn’t want to seem like a crazy dog lady. I often get asked “how do you manage?”, but honestly I’ve always felt that with some strategies in place easy living with multiple dogs can be a reality and not just a dream.

Three dogs are easier to live with than five were. Even when two are energetic and one is geriatric, but still convinced he can do everything if he just flings himself at it. But it’s not because there are fewer of them.

I like to think that I’ve learned some things along the way, living with multiple dogs. I’ve got better at managing them and predicting where management or training is going to be a good idea.

At home, my management is largely based around the use of a trained behaviour. I use it anytime I don’t want spaniels under my feet. Or if I want them to be still for a moment so I can count them or something.

Sigh. My dogs are excellent at discriminating context. Much better than my husband is at remembering cues.

Basically, anytime it would be useful to have my dogs stay in one spot for a bit I use a stationing behaviour.

Let the environment cue the behaviour

I like to go a step further and instead of cueing my dogs to station every time, I deliberately teach them environmental cues for stationing. When I open the dishwasher or get the chopping board out, they immediately go to their spots. These days I just have to walk into the kitchen and Flint will offer his stationing behaviour. He always gets reinforced for it, usually with a big fuss on his bed. Because him immediately going to his bed when I walk in the kitchen is often a good call. It prevents him crowding around the doorway to the hall and makes it so much easier when I’m carrying things like the food shopping.

My other top tip is to notice when your dog is doing something you like and reinforce them for it. Kathy Sdao refers to this as SMART – see mark and reinforce training. You can read more about her approach in her book, Plenty in Life is Free.

I like to have pots of treats around the house, at least one stash in every room my dogs are allowed in. Usually I just have standard dry dog food in them. I often place the treats strategically if there is a particular behaviour and scenario that I want to encourage. For example, I have a pot that I can grab from as I walk out into the hallway to answer the door. This way I can toss the food after someone knocks on the door easily. Or a pot by the door to help with waiting at thresholds.

Whenever I catch my dogs doing something I like, I mark it (using my verbal yes or good marker) and toss them a treat. I’ve found it’s the easiest way to teach a new dog (puppy or adult) the ‘house rules’ when they first join us.

What your rules are doesn’t matter. I like dogs that can mooch and do their own thing when I’m working. So I spend a lot of time reinforcing them for playing with their own toys on their own, chewing, pottering in the garden by themselves.

Waiting at particular doorways is heavily incentivised, as it doesn’t seem to come naturally to spaniels; I like them to step back away from the door too when I walk through. As I’ve said, I encourage stationing behaviour a lot.

People are exceptionally good at noticing things we don’t like. We aren’t so great at noticing the good stuff. It’s why the habit of appreciation is so useful as a reflection exercise.

Use SMART to stop behaviour

Often I use SMART to teach my dogs some alternative to the behaviour I’d rather they don’t do. For instance, Flint used to jump up a lot. And when I say jump, I mean head height, constantly. My husband encouraged him to throw himself at you from high surfaces as you walked by. A trick that Flint really loved and then did all the time. So I spent some time capturing those moments when Flint had four feet on the floor. Now we have far less jumping up.

I also asked my husband to put his trick on a proper cue if he wanted to continue to do it with Flint. I don’t like it that much but it’s their ‘thing’ and they get such enjoyment out of it it felt mean to squish it. Flint learned that I never give the cue pretty quickly. So there are no surprise attacks.

I also used a combination of stationing and SMART to teach Flint to wait his turn when I fuss Fraggle. He used to barge Fraggle out of the way, and if he was particularly excited, he might tell her off while he did it.

I started out by stationing Flint first, then fussing Fraggle, then reinforcing Flint with both food and releasing him for his turn for a cuddle. As he became more fluent in the stationing, I waited for those moments where he would see me fuss Fraggle and offer the stationing behavior. I reinforced immediately at first, then gradually delayed it so he sat on his station and waited for a bit. These days, he often just walks away and does something else, or sits waiting nearby (on a station or not). I’m not bothered if he stations or not really, it was just a convenient way to get the idea across to him. So he gets reinforced for waiting with his own attention party once Fraggle is finished with hers.

The real superpower in teaching your dog not to do something is to anticipate when they might do it, then reinforce an alternative before it starts. Get in quickly and be proactive rather than reactive.

For me, stationing and SMART make living with multiple high energy dogs much easier than you might think. With far less need for micromanaging and nagging, which is stressful for everyone.