How to Make Your Own Snuffle Ball – A Snufflemat Alternative 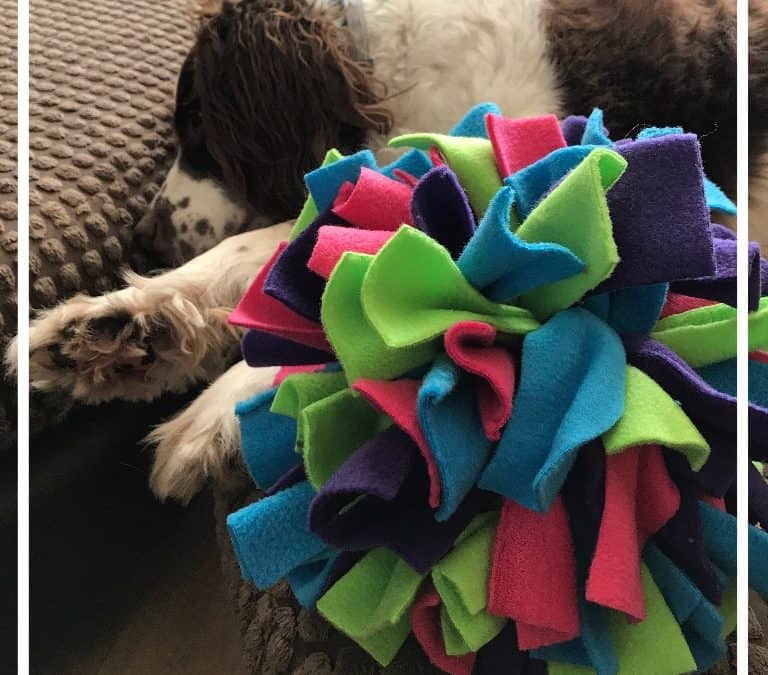 Maybe it’s just my dogs, but sometimes in their enthusiasm to find the hidden treats my spaniels get a little creative with their snuffle mats. My old boy Breckin in particular ends up throwing the mat around which a) means all the treats fall out pretty quickly, b) I worry about his neck and back as he has spondylosis and the idea of the snuffle mat was for quiet peaceful calming time, not ludicrous Springer antics……

So since I have a fair number of those holee ball things around the place (thanks to Springer no. 2 Fraggle) I thought I’d see whether I could come up with something that would allow Breckin to fulfil his desire to move things around, but encourage a somewhat calmer approach rather than grabbing and flinging, and also be lighter so that if flinging did ensue it wouldn’t be so potentially harmful for him (and anyone else that might be nearby).

It was a hit! He loves it. Although in this photo he doesn’t seem that impressed I admit.

This is actually really simple to make, the hardest thing is cutting up all the strips of material.
You need a holee ball – one of those rubber lattice style balls with thin strips of rubber creating a geodesic dome type shape made up of hexagons and the odd pentagon.
A lot of strips of material – I use fleece, but I guess any material would work really. I cut the strips into 50mm (2″) wide and about 240mm (9.5″) long. I happen to have some bright fleece around from making snuffle mats before, but you can cut up old fleece jackets or similar, your dog won’t mind.

I think you’ll agree that Breckin looks very excited about what’s going on here and is not at all resigned to having to trial yet another idea of mine.

Take a strip of material and tie it around one of the edges of the “holes” in the ball. Just a single overhand knot will do.

Yes that’s right for each hexagon you’ll tie six strips around the edge (clearly just 5 for the smaller pentagons).

I’ll admit as the ball became more covered I’m pretty sure the occasional edge got missed but as long as you’ve got good coverage it won’t matter.

I tied the knots pretty tightly but I only used a single overhand knot as I wasn’t sure how large a gap would be left if I used double knots – and I didn’t want to make this too hard to start with.

I just filled with some kibble – I used small bite to start just to check how easy it would be to fall out (easier than I had thought), I just filled by pushing it through one of the larger gaps between the fleece strips I could find – the hexagon holes are your best bet, the pentagon ones were pretty much blocked by the fleece I found.

The more eagle eyed of you may have noticed that the holee ball I used had a mini tennis ball inside – that’s just because I grabbed one of our training balls to use, but I found it added some weight to the whole thing and allowed Breckin to roll it easily, it also probably prevented the really small kibble from just falling out in clumps too.

This was certainly less time consuming to make than the snuffle mats I’ve made, and we definitely had more calm rolling than mental flinging about from Breckin so it was a win in my book! It’s also quieter than the traditional kibble style feeder toys which are often hard plastic and certainly my guys like smacking them into walls and furniture so this makes a welcome change.

You can see Breckin enjoying the finished product below.

Have a go at making your own and send me the photos or videos of your dog enjoying your hard work.