How Start Button Behaviours Can Improve Your Training 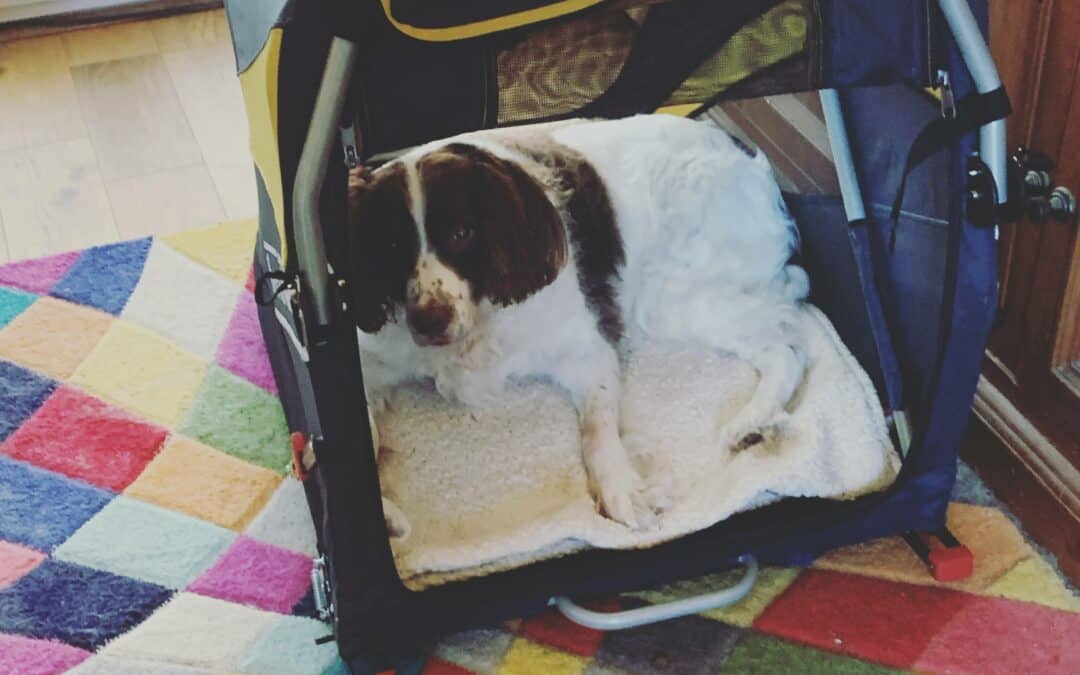 Start button behaviours can really help you power up your training. They are especially helpful for dogs fearful of certain stimuli like noises or vacuum cleaners. They are also useful for procedures where we need to do something to our dog like grooming or putting on a harness. I first heard about using an offered behaviour before you start a procedure several years ago. At the time I thought of it as an ‘OK go’ signal. Emelie and Eva of Carpe Momentum talked about using start button behaviours in their book Agility Right from the Start. They’ve done much more with them since then – hear them talk about it on Hannah Branigan’s podcast episode.

Saying when something will happen and having the choice to say no gives our learner control over the more usual desensitisation and counterconditioning procedures.

The ability to actively participate will build confidence in your learner. Not just for the procedure you’re trying to teach, but in you their teacher. If your learner knows that you will honour their ‘no’ they will be much more willing to opt in. When they do say no and you listen. They will be more willing to stay with you and perhaps try again, rather than taking the first opportunity to run away.

Using start buttons gives us the opportunity to have a conversation with our dog. We can learn a lot when we have a structure to hang our procedure on. Whenever we are training, we look at body language to interpret how our dog might be feeling. With a start button procedure we don’t have to rely on that, we can look at the latency of their yes behaviour. Latency is how long they take to start the behaviour that will make us start the procedure. If we see some hesitancy, the latency is increasing. That’s information that they probably aren’t as comfortable as they might look.

Start buttons are an opt in strategy rather than opt out. So any behaviour that isn’t a yes is a no. When our dog says no and we honour it, well that tells our dogs something too. It tells them they can trust us.

More than just learning to put up with

For most things I teach my dogs, I want them to be active participants, not passive. I don’t want them to have to learn to put up with things. I want them to like it, or at least be willing to do it for the right outcome.

Start buttons give our dog an active behaviour to engage in. Clicker training, or any positive reinforcement training, selects for particular actions on our dog’s part. Even when we might want for him to stop doing something else, it’s inefficient to teach an absence of behaviour. And yet that has often been the approach for desensitisation and counterconditioning procedures. We’re often looking for ‘no signs of stress’ or lesser behaviours. With start buttons our learner gets to do something and we get to reinforce an active behaviour just like we know we should.

Framework for all training

Once you get into the habit of looking for places to use start buttons, you’ll see how you can use them everywhere. You might even recognise that you’ve been using them unknowingly as part of your everyday life with your dog. When you recognise you’ve already been doing it naturally, you can make it a conscious decision and really see things take off.

Putting on a harness

A simple example that i use everyday might be how and when I put harnesses on my dogs. I usually put them on by a gate or door. My dogs’ start button is to stand by my side facing the gate. The scenario usually looks something like – I grab harnesses and leads and let my dogs into the front garden. They run about sniffing and toileting and I stand at the gate holding the harness. Once my dogs are ready, they line up by my side, facing the gate, and their harness gets put on. I don’t call them over; I don’t put their harness on until they’ve taken up their start position. If I lean over to put the harness on and they move, I stop and I’ll wait until they are ready again.

Introduce your dog to something new

Another example is Breckin my elderly spaniel and his new chariot, some might call it a pushchair, but we like chariot.

Breckin needs the chariot as he can’t walk well anymore, but he doesn’t enjoy being left out of the daily walk. I could have put him in it and taken him on a walk, and it probably would have been fine. He’s been confident about things moving underneath him in the past. But why take the chance when I knew I could introduce it to him to ensure he was confident?

I started with the chariot on the floor with no wheels and taught him to get in and lie down. I used a start button when I introduced movement. I started by rocking the chariot slightly and tossing him a treat. Within a few repetitions Breckin was expecting the rock and was looking at me after he ate the treat – that became the start button. I wouldn’t rock the chariot until he looked at me. Then I tossed the treat.

Then I did the same procedure with the wheels on. Looking at me made me move the chariot, then he got his treat. Looking away stopped the movement.

In this way I could have a confident dog who looked to get into the chariot whenever it was available so we could play the moving game within two sessions. He’s been able to ride in it on our normal walks ever since.

For lifting your dog

Breckin and I also use a start button for helping him onto the sofa. As his back legs have got weaker he has difficulty jumping up onto things now. He has steps and a ramp to help him on the sofa but he has become weak enough now they are no longer enough.

Breckin rarely appreciates physical help. We got ourselves into a little pickle because whenever he approached the sofa and looked like he wanted to get up there; I jumped up to help him. He’d then run away – which with his back legs looks more like a drunk shuffle.

So we’ve come up with a strategy together. When he is ready for help onto the sofa, he will step his front feet onto the step, I can then get up and he will stay positioned as I place my hands under his chest and bottom. He lifts a front paw to tell me when he’s ready for his boost, and I give him the help he needs to jump up onto the sofa.

I know exactly when I’m needed and don’t accidently pressure him to get into position, or try to lift him before he is ready. He knows that I won’t pick him up unless he’s given me the signal.

Sometimes there is no option because something *has* to happen and it has to be now. If there is no choice, don’t offer one.

For Breckin, this happens at bedtime when we need to go upstairs. Since his last vestibular attack, he can’t get upstairs by himself. Especially not when he’s more tired. He doesn’t enjoy being carried at the moment – it’s either pain or residual dizziness from his vestibular issues. So I use a sling affair around his chest and a boost to his backside so all he really has to do is move his feet – I take his weight.

Breckin isn’t keen, but we need to go to bed and our relationship can’t survive me sleeping downstairs on the air mattress again. So when it’s time to go upstairs, I don’t give him a choice. I tell him bedtime, put the sling under him, boost his butt, and off we go. The cue let him know what is going to happen and helps me avoid poisoning the sling. If he didn’t know if I was going to force him then he would probably avoid the sling when he saw me pick it up. When I pick up the sling and don’t use the cue, he knows he can say no. He also doesn’t worry about whether he is going to be boosted up the stairs whenever we are near them; he knows exactly when it’s going to happen.

What if my dog never says yes

Whenever I’ve taught start buttons to clients one question I’m always asked is ‘what if my dog never says yes?’

It’s a valid concern, but in my experience it’s something that usually only happens when you aren’t breaking down your criteria enough and you’re lumping. Or, you aren’t listening hard enough to those subtle nos.

If my dog isn’t saying yes, or the latency has increased to where I’m having to wait for him to say yes, then my strategy is – Make it easier.

Start buttons work because the procedure is predictable. Often we are looking to increase the difficulty of the behaviour they are saying yes to. For instance, I started with rocking the chariot a tiny bit. I can’t jump from rocking a tiny amount to lifting it a foot off the floor and letting it slam back down. That’s way too unpredictable. How can your dog knowingly say yes to that? Make sure you are increasing criteria a little at a time in small enough slivers that it is never unpredictable. If you make a mistake – your dog will let you know, because their next yes will probably have some hesitancy – when you see that happen, back off and break it down into even finer slices.

Listen for the slightest no.

Don’t wait for your dog to shout at you. Notice the absence of an enthusiastic yes and honour it for what it really is – a polite I’d rather not. Give him a break, rethink your approach, use better treats (although be wary about this one as for some dogs they will say yes to get to the good stuff even if they aren’t that keen).

Start buttons can be used in more places than you think. It’s my favourite strategy for working with cases where I might have used a straight counterconditioning and desensitisation protocol in the past.

Where do you think you might be already using a start button? Where could you use one? Write and tell me, because I really want to know.

And if you need some help get in touch.