We use food dispensing toys a lot here at TWW HQ, stuffed kongs are a staple but we use the usual kibble dispenser types also, even empty coke bottles are utilised -the dogs really love those and the noise they make.

The first problem I run into with food dispensing toys is setting the level of difficulty. When first introducing the idea to your dog you want it to be easy, but pretty quickly you want to increase difficulty to make it last longer and also to teach your dog persistence and frustration tolerance. This can be difficult to achieve with some toys, you have limited ability to control the opening sizes – I often resort to stuffing in crumpled bits of paper to make it a bit more difficult, but then you can have the issue of how to get said paper out…..

This is not a problem with the Snoop as you can add a Nook (or actually any similar sized ball with a couple of holes in it). The Nook’s even come in different patterns – the holes of which can make it easier or harder for the treats to come out. The heart shape would be easiest, the smiley face the hardest with the peace sign lying slap in the middle. Of course you could rotate the Nook a little so the holes were obscured making it that bit more difficult for the treats to fall out. 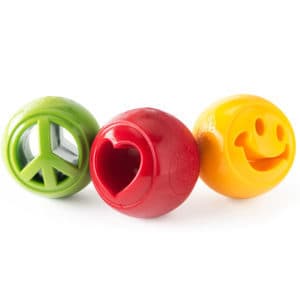 Flint, my working cocker spaniel (currently 9 months) loves it. He’s pretty quick at emptying food toys, even frozen kongs, as he was fed exclusively from them right from 8 weeks on wards. With the Snoop and peace sign Nook combination he took a good 30mins to empty it of a couple of handfuls of kibble. At one point during the session I filmed (see below) the Nook ball fell out (I didn’t push it in well enough as that doesn’t normally happen). I was expecting him to empty the Snoop very shortly after but he didn’t. Although the Snoop design looks incredibly simple (and it is) the lip that forms when you fold back in the inner filling neck actually makes emptying it harder than you would think. After the 30mins, I thought Flint was just amusing himself with the empty toy but actually there were a couple of pieces of food left in it still.

You could easily fill the Snoop part with dried treats/food and then smear the Nook bit with something so that they’d have to unplug the holes before then working to get the dried stuff out. You could smear the lip of the Snoop with something gunky and allow your dog to give his tongue a good workout getting it out. Softer treats have worked ok too as long as they aren’t too sticky – they can get stuck in the lip but if your dog likes to chuck things around to empty them even sticky treats would probably work.

That brings me to the second plus of this toy – it’s pretty quiet, even when thrown at walls, floors, skirting boards….you get the idea. Some food toys are outside only in this house because they are just too noisy, or potentially dangerous depending on the dog’s emptying style. The Snoop is totally safe indoors and quiet enough that I can use it during phone meetings without people asking whether I’m having building work done. It also means I’d be happy for the dogs to have it in their crates in our van while I’m driving – some food toys I won’t use while driving because the noise just gets too much for me to bear.

Really easy to clean by hand, I haven’t tried the dishwasher. Planet Dog says the Orbee Tuff range can go on the top rack, but I’m not sure about this one. I think I’d worry about it warping and my dogs love it so much I don’t want to accidentally kill it.

It feels slightly softer than the usual Orbee Tuff material, but has withstood some chomping from my dogs without a mark, however it isn’t designed for proper chewing on. The Nook however gets a full toughness rating from Planet Dog.

We love the Snoop, with or without an added Nook. Possibly more than any other food dispensing toy we’ve tried. Full marks from us!