Let’s get something clear, while I use the word I actually don’t like calling them treats.

I just haven’t come up with a better word for using a small morsel of food to reinforce a behaviour a dog performs – if you have an idea for one, let me know because I’d really like to drop the term. Why? because humans think of treats as extras, often used to “spoil” ourselves. Using food in training is not spoiling your dog. I often come across some hesitation or just flat out refusal for people to use food for training or behaviour modification with their dog. This often stems from some misunderstanding about how we use the food and why, so I thought I’d try and clear it up.

This view is really common, and it’s kind of understandable why, humans often use food that way ourselves, and if it is used incorrectly or without care, it can appear as if we are bribing our dog, especially if it seems like our dog only does what we ask when he knows we have food in our hand. In addition I often hear that an owner wants their dog to do what he is told simply because he has been told and he should obey. I use clicker training a lot in classes and for behaviour modification, but even when I don’t use a clicker I often use food to reinforce behaviour I want to happen again in the future. That last bit in bold is important. The food is used after the behaviour happens, it’s used to reinforce behaviour, not to elicit behaviour in the first place as a kind of promise – hey, you can have this if you do that – you could argue that as bribery. Often this is where people fall down as we can sometimes use food to “lure” dogs to do the behaviour we want – it’s a useful and legitimate technique to teach your dog the first steps, the problem comes when you continue to lure – then because your dog has only ever been reinforced for sitting when you have food in your hand he thinks that part of the picture of “successful sitting” is the food in your hand, after all that’s the only time it’s paid off. Our own lack of accuracy and forethought has created the problem. It’s easy to solve. Take the food out of your hand and then still pay up for your dog sitting. As far as your dog wanting to do things for you because you’re you and you’re in charge. Well your boss is in charge of you too, but I’m willing to bet that you wouldn’t keep working for long if she suddenly stopped paying you. Now of course our work isn’t quite the same as our dog choosing to chase bunnies instead of coming when we call, but it isn’t far off. Often what we want our dog to do wouldn’t be something he would choose to do ordinarily, more often than not we are actually expecting him to do something quite contrary to what his natural desire would be. If there isn’t going to be some intrinsic naturally occurring reward for doing what we want rather than what he wants, then we are going to have to contrive something – food is easy, a dog has to eat any way, it’s pretty easy for us to dole out (we do the shopping and have the opposable thumbs) so we can leverage it to our advantage without too much difficulty.

He’s alive right? So he eats? I know I know I’m sounding pretty facetious, but I’m also right…… There are a few reasons that dogs might not eat under certain circumstances and some of them do make training more difficult. However for the majority of cases it’s a matter of motivation. Varying the food, using higher value food (not just boring dry biscuits), making food more desirable by not having food down for your dog all the time so he always has access to it – you would really be surprised how often I come across that last one. Unless your vet has advised you to have food available for your dog all the time this is perhaps one of the easiest fixes there is for dogs that appear to not be motivated by food. Sometimes dogs aren’t thrilled by the whole reinforcement process – just passing food directly to your dogs mouth might not do it for him, maybe he’d like to work a little for the food. If I want to increase the energy in a training session I will often thrown the food for my dog to chase and grab. This is often the way I deliver food to them when out on a walk too, they get to run (and sniff) to find the food, it’s a bit more exciting and seems to be worth more to them, which is useful when you are competing against the endless possibilities for dogs to enjoy out on a walk. When my elderly saluki was sick he would often refuse his food at dinner time – this was stressful to me but I did not want to fall into the trap of adding extras to his food bowl. I did find however that if we did a short clicker session (on anything, often just behaviours he already knew well) he was more than willing to eat the food that he would refuse out the bowl.

My dog will get fat

Not if you compensate for his “training calories”. Reduce his normal meals. Training “treats” don’t need to be large, even with my German Shepherds I used food cut up into pieces about the size of my little fingernail. For my current spaniels they are a little smaller still. I can chop a single hotdog into over 100 treats easily. Even better instead of feeding him out of a bowl, use his daily food for training either throughout the day or have training sessions for meal times. My dogs get a lot of their daily calories during training sessions and through the day. They get kibble (dry dog food) or chopped up raw chicken necks, or sometimes if I’m feeling really generous I’ll dole out their raw mince too (I have to do it by hand because I’ve never got my act together enough to manage feeding them on a spoon). For dogs just learning to work with me I’ll often use the raw food stuff and high value treats to begin with, but after a while most of my dogs have been thrilled to work for kibble at home and in familiar environments.

You keep saying high value food, what is that?

Food you think you dog shouldn’t really be eating normally. Hot dogs, sausages, cheese, liver, fish, beef, chicken, lamb…..basically meaty, fishy stuff is normally a good bet. Don’t go bothering with the dog treats you find in your local Tesco, instead head to the reduced shelf by the deli counter and take the sliced tongue, ham, chicken etc. Instead of using your left over Sunday roast meat for a meal on Monday, use it for training your dog! There are some good made for dog treats out there – look for ones that are 100% meat/fish (or close to it) and that are either already small, or you can chop into small pieces. I like the Meat Love and Pure ranges particularly. I chop up the Meat Love sausages into small pieces using my veg chopper (bought specifically for treat preparation I admit). 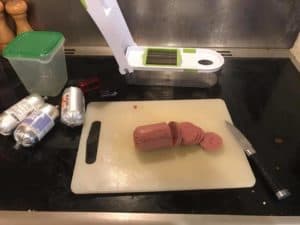 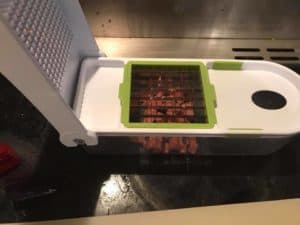 When I talk about value it’s about the value to your dog (not you and your bank balance). Every dog is individual so what my dog likes won’t necessarily be what your dog likes. It also changes day by day, hour by hour. If you’ve just eaten a big slice of chocolate cake then you might not really want any more and might prefer a glass of milk. OK that might be a bad example because who can’t find room for another slice of chocolate cake? but you get my point. Don’t be afraid to experiment with what your dog enjoys. Do bear in mind that while your dog might eat something happily that doesn’t mean he’d be willing to work for it – my dogs eat veg choppings when I’m making dinner just fine, and they’ll stay on their mats for it most of the time too, I wouldn’t expect them to call off a rabbit for it though.

When can I stop using food?

When you are willing to work for your boss for free……OK OK I’m being mean again. No of course you don’t have to keep feeding your dog every time he sits for the rest of his life, although I have to ask is that really that big a deal? As it happens though once my dogs have learned something well I start to mix up what I use for reinforcement. Often there’s something else my dog would like to do when I’m expecting him to do something else. I leverage the ‘something else’ quite a lot. For instance, I like my dogs to sit and stay sitting until released when I open the front or back doors. Initially I teach this with food, but over time the release to run out into the garden becomes the reinforcement. Every now and then I like to surprise them and top up the “sitting at the open door” account with some food but for the most part what they really want is to go outside, so I use that. There are some behaviours that I always pay out for with a tangible reinforcer (food or games with toys) recall is the big one. I always pay up. It’s worth it to me to have a dog that will come back when I need him to even if it means I’m taking food and toys out on a walk with me everyday for the rest of my life. The result of this is that is on the one occasion when I did actually forget to take anything out with me on a walk, my dogs turned immediately off the pheasants they came across in our field and came straight back to me. I made sure to have super good stuff available next time though. Want to learn how you can leverage food in your training? Or got yourself in a bit of a bind and your dog will only do stuff if you have food in your hand? Check out my classes or talk to me about private sessions and I’ll get you on your way.