Why comparison sucks, except when it doesn’t 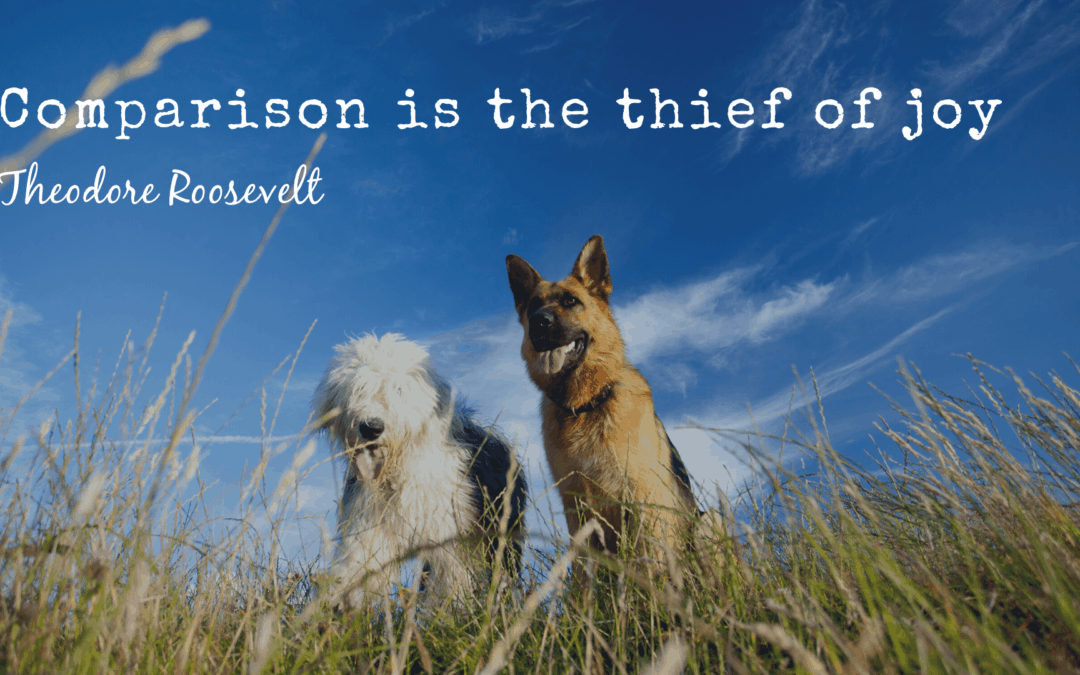 “Comparison is the thief of joy” is attributed to several people including Theodore Roosevelt, which probably means it was someone else. Regardless of who said it first, I think I agree mostly. It probably depends on how you are doing the comparison. For most people, most of the time, I think we compare in a way that makes us feel pretty crappy about ourselves. Or those around us. Particularly when it comes to comparing our dogs.

I can’t tell you the number of times that a client has said to me, “everyone else’s dogs just seem to be so well behaved” or calm, or lovely or *insert some other paradigm of virtue here*.

And that gets me thinking. If the vast majority of clients complain their dog isn’t as good as so and so’s, could it be that the perfect canine companion is a myth?

I think it is. Lassie doesn’t really exist. I think most dogs are more Beethoven or Hooch. Have I completely given away my age here? I was trying for a more modern equivalent, but I don’t know any. Both Beethoven and Hooch, while they weren’t perfect, were perfect for their families. And that’s the point.

Your dog is a product of his genetics, smooshing up against his environment and life experiences and learning. It’s a hard mess that can’t really be unpicked for examination. Dogs (and people) come with a set of genetic tendencies and probabilities. Those tendencies may be switched on, or off, or strengthened, or weakened by the environment they’ve lived in, their experiences of it and the learning that comes from that.

They are who they are. While it might not be a surprise that a Labrador likes to pick things up and hold them in their mouth, it’s also true that holding things in their mouth has a wide variation if we look at individual Labradors within the breed group.

The variation within a breed is greater than the variation between breeds. What that means is that while Collies, on average, taken as a group, tend to herd things, your individual Collie could be an extreme herder, or not at all.

As I’ve worked with more and more dogs, I put less and less stock in what any one dog should do according to breed type. More and more I just take what an individual is doing right now and determine how we can help shift that, or mold it or give it a new outlet.

Just because you have a Collie that’s chasing cars or herding the kids, doesn’t mean that it’s impossible to stop because that’s what Collies do. It also means that you shouldn’t be comparing your Collie with your neighbour’s who seems to be the perfect dog and the most they chase is a tennis ball on a walk.

Individual genetics, unique environment, particular experiences. Besides, comparing and lamenting what your dog isn’t makes you feel bad. About your dog, about you, and it stops you from seeing all the great things that your dog does. Because I know they do great things too.

Comparison isn’t just the thief of joy, it blinds you to seeing the good. And positive reinforcement training is all about seeing the good things so we can strengthen them.

In order to reinforce behaviour I have to notice the good stuff happening, even if it’s fleeting. Even if I know I wouldn’t get the same behavior under more normal circumstances. That’s the point. I’m intending to strengthen it so I get it under normal circumstances. Your dog isn’t capable of doing that behaviour under normal conditions. If they were, you wouldn’t have a problem after all.

Comparing your dog and where they are right now in their behaviour and learning journey is often like comparing a primary school kid attempting to do calculus. The young child doesn’t have the foundation skills of maths necessary for them to even have a hope of looking at a differential equation and being able to solve it. It’s not a fair comparison. Like with social media, we are often comparing our worst with everyone else’s carefully curated best.

The only time comparison is useful

When I think comparing is helpful is when you use it to track how far you’ve come. It’s why I encourage clients to keep a training diary of some sort. It’s so easy to forget where you started from, because you are so busy trying to get to your idea of perfection.

Which never happens, by the way.

It’s been my experience that after I’ve worked through a behaviour package with clients, they’ll come back for a top up several months later and complain how their dog hasn’t got better in a certain set of circumstances. I get it. Normally behaviour problems have been going on a while, then you’ve started working with someone and you make substantial progress, and then it just feels sloggy.

Unfortunately, there’s nothing I can do to reduce that hard graft part. It comes about because changing behaviour is hard. We fall back into old habits easily; we have real life to contend with and can’t always control every aspect that we’d like when we’re training, and a myriad of other reasons that all conspired to make training less efficient than is ideal. So you begin to think that you aren’t getting anywhere.

I know that’s not true.

And often when clients come back for a behaviour top up I can prove it. I remind them of what was happening when they first came to see me. How their dog couldn’t even eat food outside to begin with and now they’re telling me that their dog can only pass another one within 3 ft if they use a lot of treats.

Can you imagine if I’d told them that was where they’d be when we first started? Would they have even believed me?

Or the clients who tell me that their dog ran off chasing a deer that ran right past them in the park, and only came back after a minute of calling. I have to remind them that when we first started working together that their dog would ignore them on a walk completely, could never be off lead because they would just head off over the horizon and they’d be searching for them for hours. If I’d told them at the start of their training that they would be confident enough in their recall to have their dog off lead in the park, knowing there were deer present (if not expecting them to run within a few feet of them) there’s no way that they would have thought that was possible.

Most clients have pretty modest goals for their dog’s behaviour when they first come to see me. And that’s a good thing. Somewhere along the way those goals grow, and that’s fine too. Just remember what your first goals were and remember to celebrate the fact that you hit them. And that you hit them so well you’ve now set even greater ones.

Compare with where you were, not with anyone else. You won’t be comparing like with like I promise you.

Do you have goals and could do with some help to achieve them? Book a free discovery call and we’ll get started.